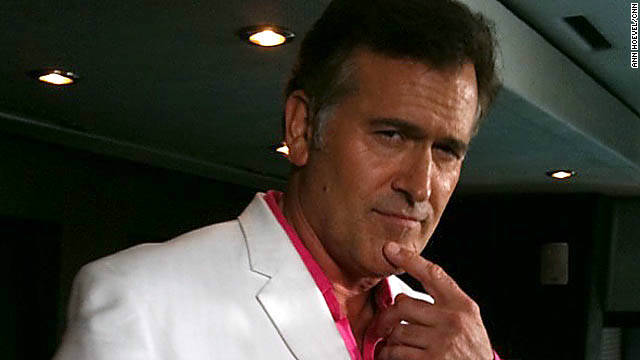 Whether you prefer the shambling or sprinting camp, there’s no excuse to be a shoddy zombie at a Halloween party.

Sure, retail stores have stocked up on fake blood and latex applications this October, but those are the same pre-packaged apps anyone could buy and use. That’s not good enough for a dedicated nerd who wants to take their effects to the next level.

So we’ve assembled a few movie magic tips from makeup gurus who know how to make you look horribly awesome this Halloween.

Bruce Campbell (“Evil Dead” & “Burn Notice” actor and erstwhile low-budget filmmaker who had to work on his own effects)
Nobody has any excuse to not have a recipe for good makeup; it’s all online. All you have to do is Google ‘special effects makeup’ and you’ll probably get a dozen or more ‘how-tos.’

What you need to do is get into latex to make your skin look different. You need to get into some colors to make yourself not look normal. Derma Wax [also known as Mortician’s Wax] is good for bumps and lumps. Between latex, Derma Wax and clown white, you’re halfway there.

A good blood recipe is critical.

Most people don’t know how to do good blood. It’s a corn syrup base, the Karo corn syrup. Get the clear kind, not the dark kind. You mix everything in that bottle; you don’t even change the bottle. Take the lid off and pour in some coffee creamer that’s already been mixed up, like Coffee-Mate.

Blood is opaque, so you need a little bit of white opaque mixture in there. It could be milk, but it will go bad on you, so I say a non-dairy creamer. Mix that up, get the lumps out, pour a little of that in.

Then take one of those red food coloring things you get in the store – not the four pack, but a separate red food coloring and pour the whole thing in. Mix that up really well, and test it on a white surface like your sink or bathtub

You might need a drop of blue food coloring to keep it from getting too pink or too red. But don’t put in literally more than one or two drops because it will turn it to make it purple. Coloration is key. It will stay extremely sticky. A note to everybody: It will get on everything. Whatever you touch, it will get on it. Be judicious with it, or don’t care about it. Blood is one of the main things that if you get it wrong, you blew it.

McKenzie Westmore (“Face Off” host on Syfy, makeup and beauty expert, daughter of makeup effects artist Michael Westmore)
You can use egg whites on your skin. On the beauty side, it’s a little known secret that some women will put it on under their makeup because it’s an instant lift to the skin, and it tightens the skin.

But if it’s put on in a little bit more of an amount, it will crackle. If you put some red paint (like the devil makeup) over the skin, and put the egg white over it, it will crackle the makeup. It gives a really interesting texture to the skin [and works as an old man makeup]. There’s also black eyeliner on the lips. You can line your lips, fill it in, and make really great, scary-looking lips.

Use black and brown and blue eyeshadows to create really great colors under the eyes. But as far as really trying to make it look good, and pass as fairly decent makeup, I’ve done a lot better to go buy some simple pieces from a local Halloween store. The instructions that come with them are so simple and so easy to do now than they were way back when. You couldn’t even find this stuff … there’s so many stores now that do cater to that person wanting to take it to the next level. That would be my best advice to someone really wanting to make it look good. So many stores have come so far with what they sell.

Cleve Hall (Star of Syfy’s upcoming reality series “Monster Man,” Hollywood creature creator and makeup effects specialist)
The techniques go back to Godzilla days and making a creature out of foam rubber.  For that you usually work with anything from one inch – to one-half inch, depending on what you’re making – of a light mattress foam you get from an upholstery place.

The best way is to order it from a place that just sells that. And then get contact cement. It’s a similar process to clothing fabrication except you don’t have to sit there worrying about sewing or seams. You’re sculpting with the foam. It pulls its own shape when you bend it and curve … this is way of making a very simple creature body.

The texturing is a matter of finding latex – which is sold in any art store as a mold-making product – that you coat it with. Then you cut into foam and glue the edges, and pinch texture into it, or burn it in with a soldering iron.

But don’t breathe (the burning latex smoke), because it’s dangerous.  Or you can actually texture the surfaces with oatmeal, corn meal, stucco, all sorts of things.

For a simple gore effect, my favorite requires liquid latex, a large piece of glass or mirror or something smooth. Spread some colored latex – colored with a little bit of acrylic paint, red paint with spots of blue and kind of blend it – in an even, thin layer on the glass. Let the latex dry, and it will stick to itself when it dries. Put a piece of thick yarn in the center, and start on one edge and – kind of like a Fruit Roll-Up – roll it around that cord or yarn in the center.

You don’t have to be even with it because it looks more natural when it’s not. Just keep rolling until basically you’ve got a long pinkish, bluish, purplish rubber tube.

Then you force it against itself into a squiggly back-and-forth shape, and you’ve got perfect intestines. Dip those into some fake blood and it’s just awesome.