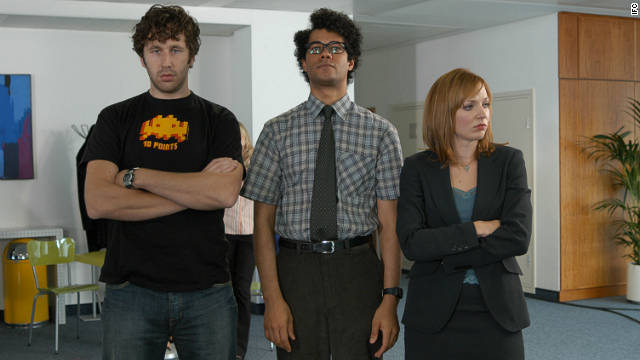 Farewell to 'The IT Crowd'

Before "The Big Bang Theory's" Sheldon and Leonard, before "Chuck" and yes, even before Hiro on "Heroes," there was Roy and Moss on "The IT Crowd."

The British sitcom started nearly six years ago, almost instantly gaining a devoted fan base among the geek set in the U.K., and later, here in the United States when it was picked up by IFC.

The show, about the two IT technicians and their new boss, Jen, toiling away at Reynholm Industries, did something before all of those other aforementioned U.S. series (also beloved by fans): It got nerd culture right.

It doesn't hurt, of course, that scenes like Roy accidentally joining a gang of bank robbers and Moss being mistaken on live television for a spokesman for the Ministry of Defence, are universally funny.

But the pair's office, which is something of a Museum of Geek, Roy's gaming pastime, and Moss' intelligent but socially awkward ways, have endeared the characters to fans worldwide.

Therefore, many of those fans were saddened to learn late last week when the show's creator Graham Linehan announced on Reddit (as appropriate a place as any) that the series would be ending, not with a final season, but a final special sometime next year.

Linehan previously blogged that, "The cast are all very busy getting famous and directing films and whatnot."

After all, Chris O'Dowd, who plays Roy, recently gained fame from his role as Kristen Wiig's love interest in "Bridesmaids," while Richard Ayoade aka Moss, recently directed an episode of "Community" and has joined the cast of the upcoming big budget comedy, "Neighborhood Watch," with Ben Stiller, Jonah Hill and Vince Vaughn.

Still, U.S. fans like Michael Haines couldn't help but recall why they loved the series in the first place. "It takes geek hierarchy into account and does it right," he said. "Most people would have no idea, but there are supernerds (like Moss) who work with perfectly acceptable IT Nerds (like Roy) and they are usually being led by someone who has zero IT knowledge. This basically describes IT support through my 13-year career."

"The references are done well. Nothing in the show IT related is faked. Every bit of that background is a real and identifiable piece of technology or nerd reference."

Haines especially loved "the episode where the guys convince Jen that the Internet is contained in a little black box with a blinking light. Everyone falls for it and goes into mass panic when they think it is destroyed. At the end of that episode Roy and Moss are there quietly appreciating what they've done. IT as the trickster god. That seems pretty accurate."

Anthony Taylor "became a fan immediately" after the show debuted on IFC.

"I submitted some props to be used in the background of series three after seeing a post from the set dresser at boingboing.net, and a lunchbox and metal trashcan I designed appeared throughout the episodes that year," he said. "I was and still am very excited to be a small part of the show."

One of the best points of the show, he said, was that it nails the "'Keep or collect this bit of tech/toy because it’s cool and might fit into this tiny bit of space I have left" mentality of many nerds.

Haines and Taylor are both sad to see it go, but trust Linehan's judgment that it was time to wrap things up.

As with many shows with precious few episodes, this isn't necessarily the end.

"I think what nerds have shown the world is that we don't let the stuff we love die," said Haines. "Sometimes that's bad, like taxidermy of a favorite pet, but other times it leads to amazing things like 'Star Trek's' revival."