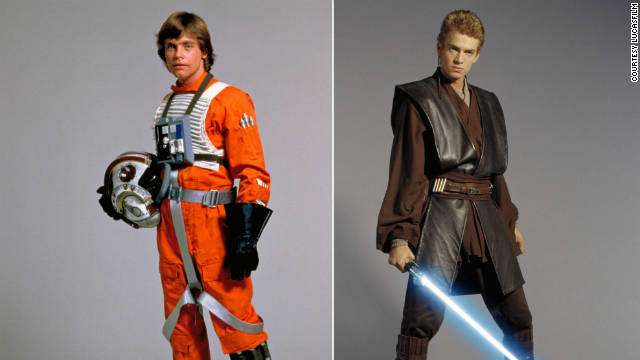 The 'Star Wars' divide: A tale of two costumes

Parents try, with varying degrees of success, to shape our kids’ pop culture tastes. For many a geek mom and dad, this extends to Halloween — or as I like to call it, a day of nationally sanctioned cosplay.

Of course, even the gentlest suggestion is a form of projecting. (“What’s not to like about this Wolverine costume?”) But even if they bite, it’s only a matter of time before they start, you know, thinking for themselves.

My son and I were on the same page when he first discovered the original Star Wars trilogy a few years ago. He latched onto those movies in a major way and displayed the all-too-familiar enthusiasm that drove my mother nuts from roughly 1977 to 1983. In ways good and bad, the apple didn’t fall far from the tree.

How to talk to your kids about "Star Wars"

Enter the Prequel Years. Slowly but surely, he began to fall for the despised “Phantom Menace,” “Attack of the Clones” and the slightly less awful “Revenge of the Sith,” which he’s only seen in parts because of that whole leg-amputating, flesh-burning thing. These films are watchable only because Ewan McGregor did such a solid Obi-Wan, but they nevertheless became his favorite of the six. Anakin — I’m sorry; “Annie” — was his ace and there was nothing I could do about it. I let it go.

Or at least I thought I had.

When the annual Halloween costume catalog arrived recently, both kids dove into it and homed in on the good stuff. My daughter stuck with her earlier decision to go as Uhura (#win), an excellent choice that had nothing to do with me. My son went to the Star Wars section and we spotted a seriously sharp X-Wing fighter pilot jumpsuit. Battle of Yavin, yo!

Me: “This is a great costume for you.”

Me: “But it’s got a helmet and everything! It’s a little more expensive, but I don’t mind.”

Him: “It’s not that I don’t like it. I’d just rather have the Anakin costume.”

After my pitch failed, I had to accept that the Halloween costume of my childhood dreams was not necessarily his. Each generation gets to decide what it likes, and I don’t want to be the cranky oldster who can’t see past 1985. At least I could relate, unlike my poor mother who was utterly baffled by my tendency to say “I have a bad feeling about this” at random times.

Though Anakin strikes me as whiny jerk with impulse control issues, I sort of get why a kid would like him. He thinks the authority figures are holding him back, gets into trouble constantly, and reacts based on emotion instead of logic. From “Attack of the Clones” on, he’s essentially a big child with amazing powers and the coolest accessory ever. (And to be fair, Luke could whine a blue streak, too.) I also must admit that the “Star Wars: The Clone Wars” series is good, as was the previous Cartoon Network show that chronicled Anakin’s padawan period.

So, fine. He gets to be Anakin and express his love of Star Wars his way. Mom will keep her comments to herself and let the youngsters take the wheel.

But I just might get that jumpsuit for myself. Dragon*Con is only a year away.

Are you dressing up in a group costume for Hallween? Whether it’s a family of crayons or you and your best friend as salt and pepper shakers, we want to see what you come up with. Upload pictures or videos of your most creative group costume idea—from years past or this year—and the best responses will be featured on CNN. The deadline is Thursday, October 27.