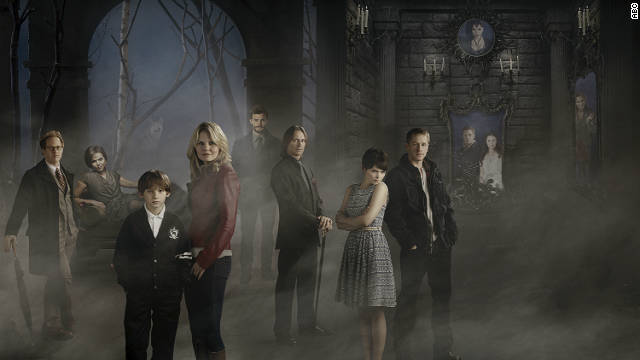 ABC’s "Once Upon A Time" premieres on October 23rd, fittingly in the old "Wonderful World of Disney" time slot. Disney, widely known for their versions of "Cinderella," "Sleeping Beauty," and "Snow White," painted fairy tales in pastel shades, making them comfortable, family fare. But ABC's new fairy tale show is not as friendly.

The series focuses on a woman with a troubled past who is drawn to the small town of Storybrooke, Maine. The citizens of this small town are all fairytale characters sent to our world by the Evil Queen. They’ve had their memories erased, and their journeys now are to rediscover who they are.

"Once Upon A Time" creators Adam Horowitz and Edward Kitsis said, “We actually had this idea in 2002. We were coming off of ‘Felicity,’ and our agent asked us if we’d like to go sell a pilot."

"But two junior writers coming off of ‘Felicity’ with this idea – everyone went, 'no thank you,'” Kitsis said.

Thanks to a little TV show Horowitz and Kitsis later worked on called "Lost," they had a bit more selling power, and we'll find out this weekend if their hunch about the fairy tale TV show genre is right.

NBC is hoping they’ll cash in on the trend as well with their new series "Grimm" which premieres October 28th. Don’t expect to see Disney-like, sanitized fairy tales with this series, though.

At this year's San Diego Comic Con, "Grimm" creators Jim Kouf and David Greenwalted promised fans that they’ve maintained the darkness of "The Brothers Grimm" collection of folk tales, but the stories are altered.

“It’s not going to be the story that you remember. We’re going to turn them on their heads.” Kouf revealed.

So which tales can we expect to see? The pilot episode of "Grimm" hints at Red Riding Hood, but the creators have a lot more in store for Grimm fans.

“'Goldilocks and the Three Bears' like you’ve never seen them before. We can say the three little wolves instead of the three little pigs, and we can say Cinderella might be called Thinderella,” Greenwalt teased.

Fans seemed very receptive to the ‘Grimm’ teaser, but are there enough fans of this genre to make this show successful in the ratings? Especially when it's up against established shows like "Supernatural" and "Fringe" which have a similar fan base?

“I think because these stories are so iconic and cross every culture that that is why we now have so many fairy tale movies and television shows,” Horowitz said.

But Rhys Ifans, who plays Hook in Syfy’s upcoming "Neverland,"  a prequel to J.M. Barrie’s classic fairy story, "Peter Pan," thinks these stories are becoming so popular again because people need to escape.

“Given this kind of fragile economic climate, maybe there's a need in all of us to escape to somewhere like Neverland where cash isn't an issue.”

Yet fairy tales, in their traditional sense, don't offer anything close to a desirable escape. In fact, they're more like the horror genre than anything else. Violence such as casual amputation is commonplace in stories like "Cinderella," but it probably didn’t go over well when Disney was planning their version of the story.

Even so, Tegan Henderickson, a fan of the genre and a blogger for Cavalcade of Schlock, believes Disney is the reason fairy tales have resurfaced in popular entertainment.

“Honestly, I think it was probably ‘Enchanted.’ For the longest time, Disney seemed eager to attempt to branch away from what had made them the most successful. Then, they decided to make ‘Enchanted’ and play with the concept that they had created," Hendrickson said.

"Once they brought new life to the old stereotype and it made them money, I think studios and producers began to consider fairy tales more marketable again.”

But even if their popularity ebbs and flows, fairy tales have always been welcome in Hollywood.

"Those romantic comedies where the unnoticed girl suddenly turns pretty and attracts her man? That's a 'Cinderella' story,"  Henderickson explained.

"A lot of horror films can be tied back to the core lessons learned from 'Red Riding Hood,' (like) don't ever talk to strangers,” she said.

Is this resurgence enough for mainstream audiences to latch onto or will it just be a passing fad without a happily-ever-after ending? Only time will tell.