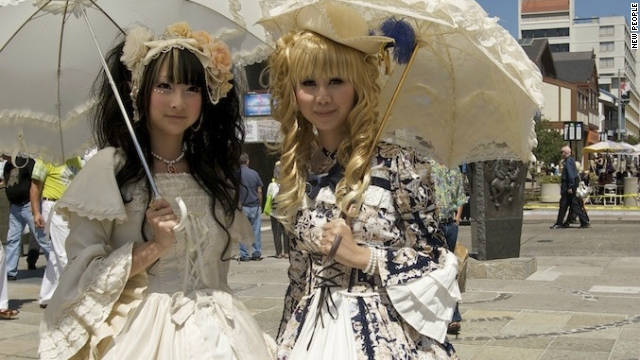 Lolita fashion finds a niche in the U.S.

San Francisco will see an exciting new addition to its fashion boutiques this fall with the addition of a line of clothing from Japanese designer h.NAOTO.

NEW PEOPLE, San Francisco's premiere destination for all things Japanese, has just hosted an event to celebrate the debut of the fashion line, which was previously only available for purchase in Japan.

Many of h.NAOTO's designs fall into the category of "gothic lolita," which is a term that may be commonplace in Japan, but is still considered a niche in the United States.

You may not be sure what you are looking at if you spot a woman wearing doll-like clothing, highly detailed accessories such as patterned stockings or ruffled cuffs, small hats, and long curled, flowing hair. Does she carry a small purse with handles? Does her clothing seem as if it's come from another century?

Many Americans may be familiar with the word "Lolita" from Vladmir Nabokov's 1955 novel, which tells the tale of a middle-aged man who falls in love with a twelve year old girl. The novel has remained a topic of discussion ever since, spawning the pop culture version of lolita, which was once used to describe a "sexually precocious" girl.

However, another aspect of the word "lolita" describes youth, and it's this meaning that's intended in the fashion style that bears this name. The style includes victorian-inspired clothing and also echoes Rococo stylings, although since its inception the fashion genre has expanded to include much more.

Women who participate in the movement are often compared to living dolls, and Japanese brands such as Angelic Pretty, Baby, The Stars Shine Bright and Pink House made major strides in making this type of fashion widely available to young people who were interested in wearing it. While Pink House has since turned to more modern, wearable clothing styles, they were credited with kicking off the lolita style with the opening of their boutique in 1979.

Lolita fashion eventually spawned a subsect called "gothic lolita", which featured the same doll-like stylings, but tied them into the gothic style that was also known in the U.S. and UK for its touches of punk, Elizabethan and Victorian inspiration. Mostly all clothing worn is black or jewel toned, and the appearance tends to be dramatic.

Japanese fashion brand Milk is credited with being one of the earliest retailers to promote the movement in Tokyo's fashionable Harajuku district. Much like Pink House, Milk has also turned to more wearable styles in an everyday sense, but their collections still echo the childlike qualities lolita fashion is known for.

So why does a young woman want to look like a doll? While the fashion may seem so elaborate that it surely seems as if it's merely to make a visual statement and nothing else, women who enjoy dressing in it would differ. Lolita fashion has a healthy following not only in Japan, but also in the United States, and a few English-speaking websites such as Lolita Fashion exist for fans of the culture to meet and share stories and photos of their outfits.

A beautiful quarterly publication called the Gothic & Lolita Bible was localized by manga publisher Tokyopop in 2007 so English speaking audiences could enjoy it as well.

Some fans of the fashion believe that it is a direct commentary on the oversexualization of the female image, and by taking it in a new direction, lolitas challenge the image of what women are supposed to look like. Some believe it makes them less approachable, creating a wall of safety between themselves and men who might otherwise approach them. Some enjoy the idea of looking doll-like and simply enjoy the fashion for what it is, and like wearing it out in public gatherings.

Tourists started to notice lolita fashion thanks to visits to Tokyo's Harajuku district, which is thought of as one of the most fashionable areas in Tokyo. This shopping districts offers tons of options for women interested in dressing in lolita style.

In addition, the area is famous for being a gathering place on Sundays for young people who enjoy alternative fashion. Visitors to the area can see a wide variety of different styles across the lolita spectrum, as well as cosplayers showing off outfits inspired from their favorite anime and manga series and much more.

While lolita fashion still remains a niche in the United States, women who participate in it are passionate about it. With the debut of h.NAOTO's fashion line in America, however, it's clear that Japanese designers are aware of the demand for their products overseas, and perhaps this means more opportunities in the future for the movement to grow and gain popularity and recognition.

How do you feel about lolita fashion? Would you ever consider wearing it, or does the idea of looking like a doll make you feel uncomfortable?