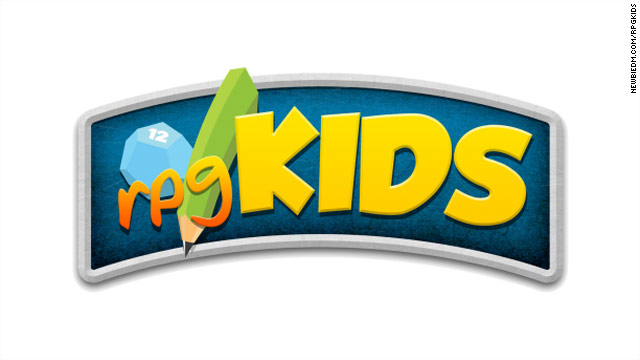 Why role playing games are good for kids

I am a huge fan of playing tabletop Role Playing Games (RPG).

I like the way the games ignite your imagination and tell great stories, so much so that I was looking for an opportunity to introduce the games to my nieces and nephews.

So I was thrilled to talk to Enrique Bertran who not only runs a very successful blog on RPG’s called NewbieDM.com but has created a role playing game just for kids called rpgKids.

We talked about the game and his thoughts on kids playing RPGs and geek stuff in general.

CNN Geek Out: Tell us little about your self.

Enrique Bertran (NewbieDM): Well, I'm a 30-something husband and dad in Miami, who's a network sports TV producer by day, and a pretty big nerd at night. I'm into all the stereotypical geeky stuff, "Star Wars," video games, superheroes, etc ... My wife calls me a man-child, and there's some truth to that.

Geek Out: One of your creations is a tabletop role-playing games for kids called RPG Kids. Can you tell us how that came about?

NewbieDM: I host D&D gaming sessions at my house with a group of guys I've been gaming with on and off for close to 20 years, and my daughter, who was four at the time, took an interest in the game and its funny dice. So rpgKids was my way of introducing her to fantasy role playing games in a simple manner. I created some kid-friendly rules, put it up on my blog, and it kind of took off from there.

Geek Out: Was RPGKids your first try at designing a game system?

NewbieDM: Oh yeah, I'm not a game designer, I'm a TV producer, that's my first passion. Game design was something I stumbled on out of necessity.

Geek Out:  How has the feedback to the game been?

NewbieDM: The feedback has been fantastic! I can't tell you how happy it's made me to hear about all these parents discovering the game and having fun with their kids. For a lot of parents it's surprising how quickly the kids learn and begin to role play. It's something that most kids do in playtime anyway, without the dice.

Geek Out: Do you think it is a good thing for kids to play RPGs?

I think it fosters creativity, teaches them basic math skills and it's fun! What's the negative? Some might say that there's a bit of violence in those games, but really it's all about how you present it. In rpgKids for example, monsters get hurt or knocked out. Nobody ever dies, and there's always an ample supply of medicine waiting in a treasure chest.

Geek Out: At what age do you think you should start getting your children into RPGs?

NewbieDM: Most gamers my age (I assume) started playing at about the same time, when they were kids and video games weren't as prevalent as they are today. I got my first boxed set at 12, back in 1985, for example. I guess it's all about what you are presenting the kids. Call of Chthulu for a little one? Probably not. Save Trixie the Unicorn from the mean goblins and celebrate with a picnic? Yeah,sure!

Geek Out: How does having them play a tabletop RPG different from playing one that is a video game?

NewbieDM: Well, rpg's are more imagination driven, more social, and again, I can't say enough about the math and reading progress my daughter made as we played together. Video games are mostly about sitting on the couch mashing buttons, and that's not something I want my kids doing yet.

Geek Out: Any other RPGs on the market that you think work well with kids?

NewbieDM: There are quite a bit. Games like "Happy Birthday, Robot" by a game designer named Daniel Solis and "Mouse Guard" by Luke Crane come to mind. The latter isn't exactly aimed at children, but it is set in a world populated by mice and can be presented in a way fit for kids.

Geek Out: In your play testing have you seen any down side of kids playing?

NewbieDM: Yeah, that she wants to play ALL THE TIME! Honestly, I haven't seen any negatives, and as a responsible dad, if I felt that our games were having any negative impact on her, I'd curb it. The one negative my wife might bring up is that I'm raising a nerd! But that's fine by me. Better a nerd than a bully.

Geek Out: Has anyone ever asked you if you where overtly proliferating nerd culture by creating what could be seen as D&D for kids?

NewbieDM: My wife isn't into really geeky stuff like D&D, so she let's me handle that stuff when it comes to the kids. I'm still not sure if she was happy or upset that my daughter dressed up as Darth Vader for her preschool Halloween. I'll take the blame for that.

Geek Out: Any plans to release expansions to RPGKids?

NewbieDM: I am actually days from releasing the first adventure pack for the game. It includes four adventures, and includes pirates, dinosaurs, unicorns and mean evil wizards. Keep checking http://www.rpgkids.com for that!

Geek Out: What RPGs do you play?

NewbieDM: I currently play D&D, "Dragon Age" (a dice based version of the video game), and "Star Wars."

Geek Out: How long have you played?

NewbieDM: Wow. Over 20 years, and mostly with the same crowd. Although now I'm doing some gaming online via Skype and virtual tabletops. Technology is wonderful.

Geek Out: Rebel or Empire?

NewbieDM: None. A smuggler in my own Millennium Falcon. I may become a rebel, but the money better be worth it.

Geek Out: Any last thoughts?

NewbieDM: Yes, whether you do it via rpgKids or some other way, take the time to share your gaming hobby with your kids. You'll be surprised at the results. Kids make great role players and storytellers too.

At the end of the day, if the gaming doesn't work out and all you get out of it is an hour laughing and coming up with silly stories, it makes it worth it anyway.

Geek Out: Where can folks find you?

NewbieDM: I run a blog for D&D Dungeon mastering called NewbieDM, and that's at www.NewbieDM.com. RpgKids is found there, or at rpgKids.com or on Twitter @NewbieDM.