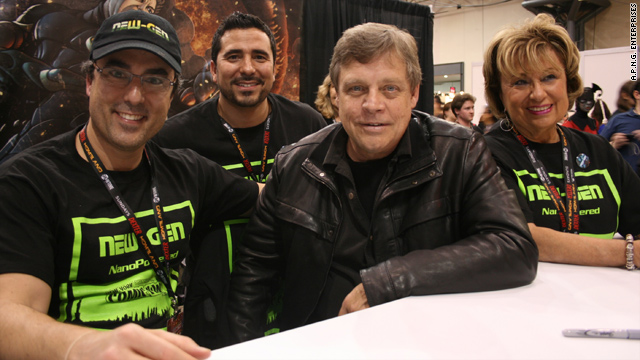 "Star Wars' " Mark Hamill is returning to comics as creative consultant for the series "NEW-GEN." He will also be involved in the series' proposed movie franchise.

"The Girl with the Dragon Tattoo" is coming to comics, from Vertigo. [CNN Marquee Blog]

"Thor 2's" release date was delayed until November 15, 2013, but it picked up a director along the way: Patty Jenkins. [Hollywood Reporter/Marvel]

NBC's upcoming "Grimm" series premiere can be seen early by Twitter followers (and at various screenings across the country, with various members of the cast and crew). [Twitter/NBC]

At the Con, "Lost's" Harold Perrineau was announced as winning the title role of the new "Blade" anime series on G4. [Marvel]

And Paul Cornell and Ryan Kelly are teaming up for a new comic book series, "Saucer Country." [PaulCornell.com]

Barney Stinson presented a pretty "legendary" slideshow all about Ewoks on this week's "How I Met Your Mother." [CBS/YouTube]

DC Comics announced that it sold 5 million comics since the launch of its "New 52."

Attention, David Tennant fans: the "Fright Night" Blu-Ray release, due December 13, will include a bonus feature mockumentary with the actor hamming it up as Peter Vincent.

Archie Comics announced that it is bringing back its classic "Red Circle Heroes," such as the Shield.

Finally, "The Avengers" teaser trailer was released – and there was much rejoicing. [CNN Marquee Blog]