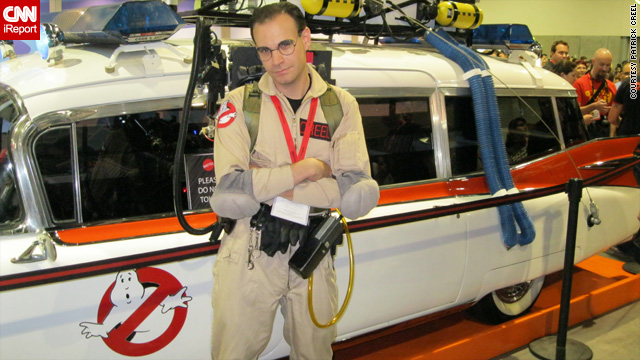 The recent announcement that "Ghostbusters" would be returning to select theaters for a brief run starting Thursday was welcomed by many fans of the beloved 1980s franchise.

But the people who are really excited about it are those fans for whom "Ghostbusters" is a lifestyle. They start chapters of Ghostbusters across the country and beyond, showing up at parades, charity events and, of course, conventions while dressing the part. In most cases, they travel around in their own version of the famous "Ghostbusters" Ecto-1 automobile.

CNN Geek Out spoke to Chris Stewart of Vancouver, British Columbia, webmaster for one of the oldest "Ghostbusters" fansites, Proton Charging, and Patrick Creel, an iReporter with the Real Tampa Bay Ghostbusters.

CNN Geek Out: How excited are you to see "Ghostbusters" back on the big screen?

Stewart: Pretty excited, though I've seen it a lot, so as much as I enjoy watching it with a crowd, I think I'm more excited for all the kids that will get to see it with a crowd - maybe even for the first time!

Creel: It's being shown in 2k projection, which is a digital format, so it's going to be the best possible visual movie experience for anyone seeing the movie since its original release.

Also, it's being shown in 5.1 surround sound, so you will really feel like you're in the movie.

Ghostbusters are still relevant in the contemporary, from new merchandise, the highly successful video game and now a new IDW comic book series, and it's all happening around the same time as Halloween, when there plenty of ghouls and ghosts on the loose, so it's only natural to see "Ghostbusters" back on the big screen in a big way.

CNN Geek Out: What is it that inspired such a love for "Ghostbusters?"

Creel: Fear. When I was young, everything used to frighten me, and then I see this movie about four guys who use humor and gadgets to battle the things I was afraid of. The things that any normal person would run from, these guys took care of. I love "Ghostbusters" for this reason. Fear and comedy go hand in hand. These guys gave the world a lesson: Don't take yourself so seriously, and have fun! When you are faced with a challenge, work together, and have a smile and laugh. You could be saving the world in the process.

Stewart: Overall, it's just a great movie. Great blockbuster, great comedy. People of every age enjoy it. But at its heart, I think a lot of people respond to a movie with horror in it where the heroes save the day from monsters instead of barely surviving it or dying. Who doesn't like the idea of average guys fighting the things under the bed and winning?

CNN Geek Out: Did you see "Ghostbusters" when it was first in theaters?

Stewart: Yes! I was in grade school and desperate to see it.

Creel: At the time I was 4, and it did have an effect on me. It was only when I was home and able to watch it about a million times that it really started to take an effect on me. There's something about sitting in a movie theater with complete strangers in the dark and watching a film together. It is something that brings us together, and I think "Ghostbusters" is a movie that really does bring us all together.

Will that happen again? I hope it does, not just for us older adults but also for the kids and teenagers as well. "Ghostbusters" is a one-of-a-kind motion picture and will always be.

CNN Geek Out: What are your hopes for a possible third movie?

Stewart: I have no hopes. That way, if it happens, I'll be excited. And if it doesn't, then I'm content.

Creel: My hopes for a third movie are for it to be as good as the others, and by all accounts it will be. Sony Pictures cares a lot about this franchise, and you can see it with this re-release. I do want to see my original four Ghostbusters: Ernie Hudson, Harold Ramis and Dan Aykroyd, and of course I want and need my Bill Murray. This was an amazing cast, but this is also an amazing concept that should stay in the contemporary. This third movie can do just that, but letting our favorite team of paranormal investigators/comedians hand those proton packs to the next generation. I have nothing but complete faith in all parties involved. They all want the best, and we are going to get it as fans and audiences.