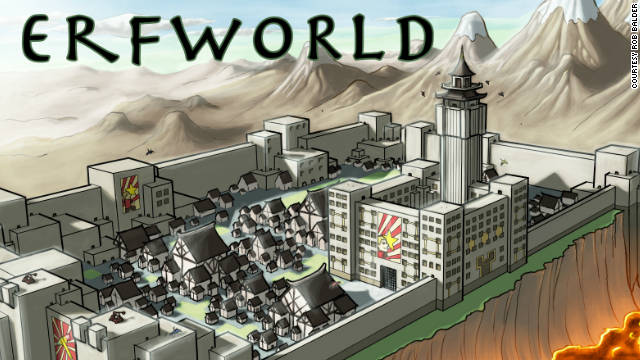 How is it possible to combine flying Peeps, ORLY owls, a propensity for cute baby talk and very serious strategic tabletop gaming with honest, emotional relationships? Probably the only way is to let "Erfworld" creator Rob Balder write it.

There's an awful lot that goes into the Web comic "Erfworld," and Balder exploits the medium for all its communicative layers.

As cute and minimalist as Xin Ye's design of the comic is, the content is stacked deep. Nearly every frame holds an Easter egg - and if you're not in the know, the Google fodder in this comic is off the charts.

I recently got the chance to catch Balder in a rare moment of free time during his hectic convention schedule. We chatted not only about "Erfworld's" clever audience (we have a lot of obsessive readers, Balder said) but about how the Web comic industry is thriving today.

Thankfully for my RSS feeds, this is no part-time hobby for Balder. Here's our discussion:

CNN: Hi, Rob! So, if you were going to describe "Erfworld" to your friend's mom, how would you do that?

Balder: "Erfworld" is a graphic novel which runs on the Internet, as an ongoing serial comic. It’s the story of a 20-something guy named Parson Gotti who is obsessed with strategy games. He gets summoned, pulled into a fantasy world that works like a game. He’s forced to be a general for the bad guys, he’s pretty sure, in a hopeless military situation, and he doesn’t know how anything works. So he has to figure out how the game or the world he’s been pulled into works. So it’s a little like "average person goes into a fantasy world" story, like a “Wizard of Oz” or a “Tron.” You’ve seen that kind of story told over and over again, and this one happens to be game-related.

CNN: There is so much information in this comic. How do you do that? Do you ever sleep?

Balder: Each page, between the illustrator and me, can take up to 60 man-hours to produce.  I’m blessed and cursed with readers who are as detail-oriented as I am. So, for one thing, we have a fan-created wiki. There are over 8,000 fan-written articles about this universe in the wiki. About the magic system and the combat system the character histories and the place names and all of that stuff. I actually have a lot of resources in terms of keeping the story together and internally consistent. And when I’m at a loss, there’s actually an Erfworld IRC channel, with 20 or 30 people always connected there, and I can just pop in there and say, “Hey, who wants to do a research mission for me? Can you tell me how many purple dwagons Sylvia had in her stack? Have I ever said definitively? And if I haven’t, is there an upper bound or a lower bound to that number?” So I don’t contradict myself. So that’s how I keep track of the details.

In terms of the density of details, the comic medium is absolutely fantastic to write to, and I feel like very few writers have fully taken advantage of the cool things that you can do in terms of the density of information. There’s a lot of bandwidth there. It’s not just about "guy throws other guy through the wall" a lot of times that’s like two-thirds of the comics page.

It’s meant to reward the curious. It’s a Web comic. I know that people have Google open in the other tab, so if they see a strange string of letters, then the first instinct is going to be to drop that into Google. And of course when I’m writing it or lettering it, I can put that string into Google and see essentially what they’re going to find if they do that, and if it’s too obscure for Google, then maybe I won’t do it. I’m using the medium as a Web comic as much as anything else. I know that it’s the information age, it’s written to be enjoyed that way.

CNN: Who's your main audience?

Balder: Well, the main existing audience for "Erfworld" is about 90% tabletop gamers. We had a very good show at GenCon because those were our readers, for certain. I go to a show that’s nearly the same size at Wizard World Chicago, and they’re comic book readers and television watchers, and they’re there because Patrick Stewart is there or something like that, and they don’t give a damn. Our sales for four days at Wizard World was not even close to the first day, the Thursday, at GenCon.

I set out to attract and engender superfans, because I, quite intentionally, was setting out to create something that was at least carrying the potential to become a Harry Potter or a Star Wars or Pokemon, one of the deeply immersive properties that you can just sort of lose your whole identity into.

Not that everyone was going to do that, but I just wanted to create something that was internally consistent and complex enough that that would be possible for some. I felt that was an important benchmark between the kind of story I wanted to tell and other more superficial types of storytelling. As a consequence, we have attracted a lot of detail-oriented, what they would call “Rules Lawyers” in the gaming world.

So the sorts of feedback that I get are very focused on the minute details of the story. I put it this way: They’ll get into a vicious fight on the forums over how many Archons can dance on the head of a pin, and that’s great. It certainly keeps me focused.

I’m really proud that last year I was estimating (the audience was 91%) male, and this year we’re 89% male. I’ve very proud of that 2%. I’ve worked hard to focus on the female characters and to impart them with a depth and to put their character decisions in the engine position. Have them driving the plot as much as the male characters. I’m trying my damnedest to make these female characters important to the storyline. I feel like we’re dealing with the demographics of the tabletop gaming community, because it only spreads through the gamers.

CNN: So how is the Web comic industry treating you these days?

Balder: There are at least 50 of us who make a full-time, professional living as caretakers of our Web comics. And of course the business side of it is more than 50% of my time. I work 90-, 100-hour weeks. This month, if you added up my actual on-the-clock hours, it's got to be well in excess of 100 hours a week.

Less than half of it is the actual creation of the Web comic. I've been self-employed primarily as the creator of "Erfworld" for more than four years. Prior to that, I had a job as a data analyst, and last year was the first time that I matched my salary that I had as a data analyst when I left. And this year, we're going to bury it.

We were getting down to the nitty gritty, sharing ad revenue numbers and book sale numbers and visitors to the site and all that other stuff that you're never going to say on a panel but you need to know in order to benchmark how you're doing.

There are some Web comics millionaires out there already. I wouldn't mind being one of those fairly soon (as in before the end of the decade) myself.

There are people who are doing very, very well, either with their comic or with side companies that came up as they tried to solve problems that were facing them - that no one was solving. Like, how do I make my own ads or can I make a con around my comic, all that kind of stuff.

There are people who are real entrepreneurs, real pioneers, who continue to do their Web comics.

CNN: And what about fan appropriation of your content?

Balder: I'm highly in favor of it. In fact, we're not showcasing it nearly enough. We're going to build out the website later this year, I hope, by the start of next year.

One of the things we want is a fan art and fan fiction and make-your-own-Hamstard kind of blog. If you go to "Erfworld's" website you see a terms of service statement at the bottom, which is a lot like the semi-controversial Google+ terms of use, where they get unlimited license that's unrevokable for the use of your content that you post there.

So, we figure we're at least as covered as Google+, and that seemed fair enough. We have the trademarks. It's less a copyright issue than it is a trademark, and if I see an infringing use of my copyright or I see a dilution of my trademark, maybe I'll do something about it.

I say this to you as a fellow geek: I knew we had made it, really made it as a Web comic, about two months ago when somebody showed me the "Rule 34" of "Erfworld." (In case you, dear reader, don't know about "Rule 34," check out Urban Dictionary's definition.)

And it wasn't just that people had drawn and posted rule 34 of Erfworld ... but what really made it for me was I looked at the comment thread and an argument had started about ... whether or not this was possible in Erfworld mechanics.