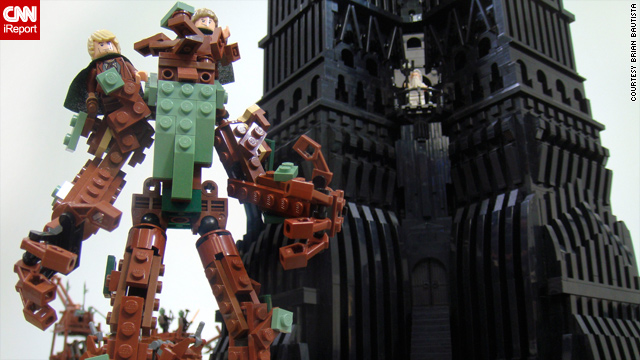 Classic 'Lord of the Rings' battle captured in Legos

Lego sculptures continue to build (no pun intended) pop culture relevance, but one entry into last weekend's BrickCon in Seattle has the geek world buzzing.

A group of builders called TheOneLug turned heads with their detailed re-creation of the Last March of the Ents, one of the most memorable moments from the "Lord of the Rings" books and films. CNN Geek Out spoke to TheOneLug's Brandon Griffith and Remi Gagne about how it all came together. 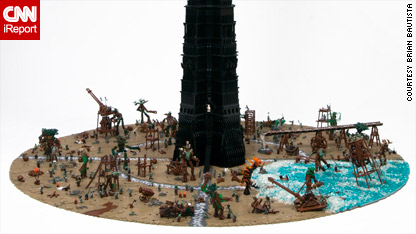 CNN Geek Out: How long have you been doing these kinds of projects?

Griffith: Our group, TheOneLug, consists of four builders: Alyse Gagne, Remi Gagne, Brandon Griffith and Bruce Lowell, all based in Southern California. We started building as adults about 10 years ago, when Lego started releasing "Star Wars" Lego sets. We all realized Lego’s amazing potential as an art medium and started producing our own individual creations. We all had our own share of success on the Lego convention circuit, but it wasn’t until this project that we worked together for the first time.

CNN Geek Out: Are you big Tolkien fans?

Gagne: We're all big fans of the three movies. Alyse and I are huge Tolkien fans! This project worked well for all of us, because the chosen scene from the book is so wonderfully and accurately depicted in the movie. It is the kind of epic scene that begs to be built into a large Lego model.

CNN Geek Out: What was the most difficult part of the process of building this? How long did it take?

Griffith: It’s funny, looking back, before this project, we’d never built anything together and we were largely unaware of each other’s working methods. That potential communication barrier was broken almost immediately, and we were all on the same page. It turned into one of the easiest, most fun, creative group projects I have participated in.

Back in February of 2011, Remi, Alyse and I watched a 12-hour marathon of the movies at a special screening in Hollywood. The following weekend, Remi and I were talking over lunch and what started as a simple idea - “someone should build a Lego Ent” - ended up as “we are building a Lego version of the Last March of the Ents with a 7-foot Orthanc tower in the middle!” Alyse quickly came on board. We felt we could use one more builder, so I reached out to Bruce Lowell for some minor additional help. Once he saw what we wanted to do, he became incredibly motivated and ended up building the top half of the tower.

We drew up plans and split the tower into five sections, which Bruce, Remi and I then built. It took several months to begin to see results but, in late April 2011, we were able to stack the tower sections for the first time and get a real idea of how large this layout would be. We finished the tower in June and began working on the base.

Bruce came up with the basic Ent design, and from there we set out to make a group of Ents that remained true to the vision of the books and films. In the end, we wound up with 23 separate Ents, each one unique. Throughout the build, each of us brought our own individual style to this project, and instead of running into conflicts trying to integrate those styles, they perfectly meshed together.

CNN Geek Out: We hear it did well at BrickCon.

Griffith: BrickCon was a huge success for us. Out of the 700-plus Lego fan creations that were shown, we won “Best in Show.” However, I’d say our greatest satisfaction came during the public hours of the convention, when we could stand back and see people’s reactions to our work.

CNN Geek Out: What is it do you think, about Tolkien that has inspired people for so many years?

Gagne: Tolkien’s work reminds us that pure creativity can still exist. He created a fully realized and imaginative world filled with relatable characters. His work is epic, compelling and full of many amazing details that really bring Middle Earth to life. He gave us complete languages, entire cultures and races, and a vast, rich history. Reading his work, you feel that Middle Earth is a real, whole, alive place and you are simply visiting it, for a time. His works extend a challenge to all of us to push our creativity to a new, higher level.

Our creation is an attempt to pay tribute to Tolkien’s masterworks. Like his books, our model is at once grand in scale but also immaculately detailed. It’s a 7-foot tower but there’s so much intricacy in the Lego construction and the tableaus we’ve created that there’s always something new to see.

(Click here for a better view of the full display.)