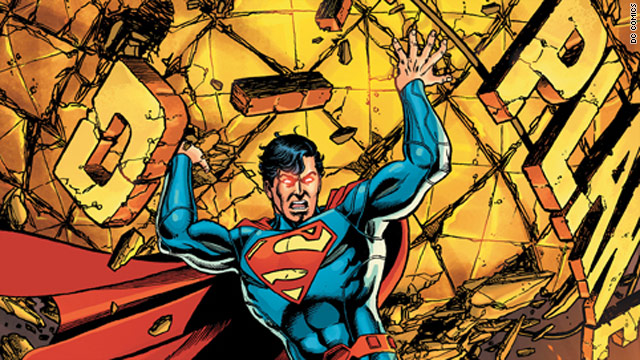 Spoiler alert: This post gets all analytical about the meaning of comic book superheroes. To do so, it references situations from DC Comic's New 52 books. If you do not want to know what sort of things are included in those books, take a pass.

The first issue of “Justice League” begins with: “There was a time when the world didn’t know what a superhero was.”

After reading every first issue of DC Comics’ (which, like CNN, is owned by parent company Time Warner) New 52 re-launch, I found myself wondering if the world does know what a superhero is. Is a super-hero working class or a CEO? Are they activists? Survivors? Strippers? Police? A PR gimmick? Are super-heroes sexual? Can they be racist?

Even if you don’t read comics, the re-launch is a significant cultural event for 2011. It features 52 separate intellectual properties being pitched out of a major media corporation.

Which one gets a home run could be the next major motion picture or new weekly television series. These stories are part of our zeitgeist and they’re demonstrative of how our popular culture is both consumed and created.

There are themes that run through these books so strongly that they suggest the publisher attempted to identify with readers by making the New 52 topical and relevant to our contemporary world. Issues of media, class, terrorism and violence come up repeatedly in these comics.

Superhero 2.0
Social media and the evolution of news are a common theme through several of the new titles.

In the new DC Universe, villains film violent videos and post them online to become celebrities. Likewise, citizen journalists are constantly trying to capture superhero content for their YouTube or Facebook updates. Aquaman is rudely interviewed for a blog. In “Blackhawks,” a photo of one of their members’ circulates problematically online. The speed and fluidity of new media seems to really confuse these heroes.

Nowhere is this more evident than in “Superman.”

With the inevitable decline of print news, Clark Kent’s newspaper The Daily Planet is bought out. Kent, Lois Lane and Jimmy Olsen now work for the ominously named Planet Global Network. Kent doesn’t like it because the station’s owners have immoral journalistic practices, like illegal wiretapping. We see scenes where the network takes public tweeting and cell phone videos just as seriously as it does its on-site reporters.

Not all of the new DC Universe takes this evolution of media lying down.

The United Nations forms Justice League International as a public relations endeavor. “Stormwatch” has a character named The Projectionist, who manipulates media to the team’s advantage. And Red Robin is this world’s version of Julian Assange “creating chaos by blogging and wiki dumping classified information.” He does this to combat the mysterious organization called N.O.W.H.E.R.E. who are said to “control the media.” N.O.W.H.E.R.E. is a great example of another theme present across the New 52, corporate villainy.

Villains Inc.
Batman owns Wayne Enterprises. Green Arrow runs Queen Industries. Mister Terrific’s company is Holt Industries. Aside from these examples, all other corporations in the DC Universe seem to provide cover for the villains of these comics.

For instance, the aforementioned N.O.W.H.E.R.E. is up to some shady stuff, including cloning their very own Superman to be used as a weapon. They’re described as a “clandestine international organization” whose “sphere of influence transcends business and borders, politics and technology.”

They’re not the only corporate villains in the New 52. Mister Terrific tangles with a British CEO wearing a super-powered exoskeleton, while O.M.A.C. attacks Cadmus Industries to steal information from their science lab.

The most obvious corporate conflict comes in “Action Comics” where Lex Luthor describes himself as a “disgruntled businessman.” He attempts to aid the U.S. military in the destruction of Superman, who’s presented here as a working class hero in jeans, work boots and a t-shirt. Superman, solidly against bribes and corruption, comments that he’s not sure the police even believe “the law is for both rich and poor.” DC couldn’t have known this, but Superman’s words strongly reflect the current protests and arrests in New York.

This distrust of the wealthy crops up in other New 52 comics as well. In “Batman” someone asks, “Do the rich really know the problems of their city? Do politicians?” Mister Terrific’s love interest Aleeka doesn’t trust his friend Karen Starr because she’s rich. Green Lantern Jon Stewart has a dramatic confrontation with building contractors who want to lower architectural safety precautions to keep their costs down.

Almost across the line it seems that corporations and the wealthy are guilty of something in the DC Universe, whether they’re trying to take over the world, hide the identities of their vigilante owners or build superhuman weapons of mass destruction.

Terror and war
It was only 47 minutes into my reading of the New 52 and I already felt immersed in a bleak world, where senseless, menacing acts happen constantly. If DC really did encourage its creators to set superheroes in contemporary society than it’s not surprising that a lot of these comics seem haunted by terrorism and the events of 9/11.

Here’s a sampling of plots from this first month of comics:

If all of this really happened in September 2011, our society would be apoplectic at these horrific acts. So how does the DC Universe respond to all these terrorists and WMDs? Well, superheroes of course save the day a lot of the time.

We see Batman implementing facial recognition software into his crime fighting gadgetry. Even an alien in “Red Lanterns” recalls “the mountains of Afghan” when considering places throughout the universe where he should punish beings for their actions.

But DC’s governments and transnational organizations develop security measures of their own against these threats. The United Nations runs a covert operations team called the Blackhawks. The U.S. government uses death row inmates for secret missions in “Suicide Squad.” A U.S. military colonel sends assassins after Cole Cash in “Grifter” because he’s a former soldier seemingly gone rogue, killing a flight attendant and jumping out of a plane. The colonel wants Cash dead so the media won’t find out his background and assume he’s a homegrown terrorist. Finally, in “Men of War” we see U.S. soldiers sent against enemy combatants in an unnamed country with unidentifiable peoples and a vague objective.

It’s “DC Universe Presents: Deadman” where the depth of this theme really comes through. Deadman’s latest host is a depressed veteran who lost his legs to an improvised explosive device in an unnamed conflict. He wishes he had died, like the rest of his friends in the incident. Instead he’s haunted by Deadman, whose struggling himself with life, death and everything that comes between. It’s a nice use of this contemporary theme of war and terrorism, without resorting to hyperbole or excessive violence as a solution.

Seven severed heads and a partridge in a pear tree
In the first issue of “Animal Man” the main character has an internal conflict. He tells people he’s not interested in the typical super heroics of punching villains, but at the same time he finds himself craving action and … wanting to punch someone. It’s an interesting moment of contradiction, one that reflects DC’s own confusion about how to approach violence.

DC Comics was one of the last publishers in the industry to adhere to the Comics Code Authority, a regulatory system original placed on comics in 1954. But in January this year, DC dropped the code from their products. Now they have their own ratings system, which includes “Teen” and “Teen Plus.”

Nowhere in the comics could I find an explanation defining what the difference was between the two, which is interesting since DC responded to the recent Starfire/Catwoman controversy on their twitter feed with the following: “We encourage people to pay attention to the ratings when picking out any books to read themselves or for their children.”

Since I couldn’t determine the difference, I kept track of the violence and sexual content while I was reading.

Let me be clear that I am not a defender of the Comics Code or the censorship of comics. In fact, earlier this year I wrote a satirical horror comic about the events leading up to the code. I’m simply fascinated by the loose ratings here, especially when the publisher’s said goal is to bring in new readers, which could potentially include parents buying comics for their kids.

“Teen” books in September’s New 52 feature the following: Severed heads; mass murder; a naked man stabbing someone to death; someone willingly getting their face cut off; people shot through the head; a severed arm; someone boiled alive; a dead dog with its skin peeled off; a corpse crucified with rusty antique knives; hundreds of slaughtered aliens; a man cut in half; two men burned and mutilated; soldiers blown up by explosives; two severed torsos; a severed finger; the genocide of an entire alien planet; two dead aliens impaled on spikes; three people knifed to death on a train; one broken neck; one crushed skull; two cops have their throats slit; dozens of people are killed by a hail of arrows and bullets; suggested off-panel sex with an alien; severed horse heads; a severed centaur arm; three burning women dropped off the tallest building in Singapore; a murdered family; dozens of women killed in a highway accident.

“Teen Plus” books in the same month featured: Soldiers in realistic combat; supernatural horror like vampires and demons; interrogation torture with blades, tasers and cattle prods; superheroes having sex; Catwoman in her underwear; strip teases; and a lap dance that ends with the patron being gruesomely murdered.

As far as I can tell the difference between “Teen” and “Teen Plus” is slim. The sex acts in the later books are more gratuitous, appearing on-panel. But otherwise the violence in “Teen” books is equal to, if not more graphic than the “Teen Plus” books.

I suppose a few conclusions can be drawn here. First, DC’s probably not concerned about any backlash, since teenage comics don’t seem to be regulated differently than their other comics.

Second, children must not be a target audience for this re-launch given the content.

Third, and finally, DC must have some market data that makes them think that their actual target audiences want this kind of content from their comics.

Given how much evidence shows that DC wants this re-launch to be culturally topical, it stands to reason that their research shows that their desired audience either identifies with or is de-sensitized to this much violence.

After my reading binge you might think that I wouldn't want to read comics for a while. In fact, I can't wait to read more.

If DC really is trying to incorporate contemporary themes into their comics, I think the effort will help answer what being a super-hero actually means. Hopefully these muddled representations are just growing pains, as the publisher strives to make comic books better, so that they appeal to more than just their current audience.