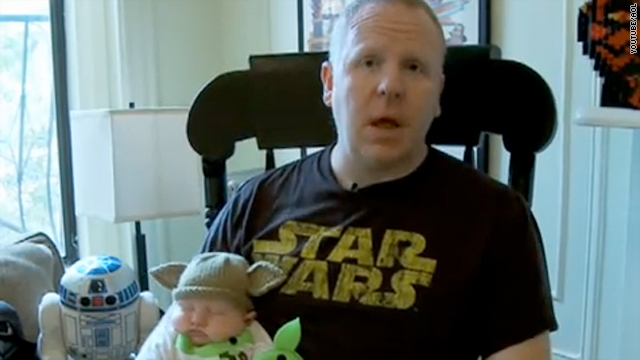 Parents often have anxiety about "the Talk."

But one viral video, which has had nearly half a million views since November of last year, aims to help dads out with that very important discussion with their children.

I'm referring, of course, to the first time parents introduce their kids to "Star Wars."

Anthony Layser, a web video producer at AOL, spoke to CNN Geek Out about it.

CNN Geek Out: Where did this idea come from?

Layser: It was just one of these ideas we had in one of our creative meetings. One of the writers had a few friends in Brooklyn who had kids trying to talk off the cuff about how they would introduce their kids to "Star Wars." She was talking about how funny it would be to get a "how-to" together from them, and we thought of it as being a documentary piece.

CNN Geek Out: So who are the people in the video?

Layser: We asked different people we knew in Brooklyn to talk honestly about how they would introduce their kids to "Star Wars." That's what's funny about it. A lot of the things they say in the video are really heartfelt. These are real fathers who are just huge "Star Wars" fans. This is something they struggled with when to show the kids the prequels. They were really excited about talking to their kids about the original trilogy, but were unsure what to do with the prequels?

CNN Geek Out: What kind of response did you get?

One of the greatest things about the video is people really relating to it, and kind of providing feedback of what they plan to do with their own kids, as far as trying to broach that subject with them. One of the fathers – the one with the "Yoda" baby – was just so proud and he posted it on his Facebook.

CNN Geek Out: What is it about "Star Wars" that makes it so successful in the world of viral video?

Layser: It was such a big part of a certain age group's childhood experience. I can remember going outside and playing, and being different characters, and it's just something so ingrained in the culture, and so important to people. It's just a common point of reference.