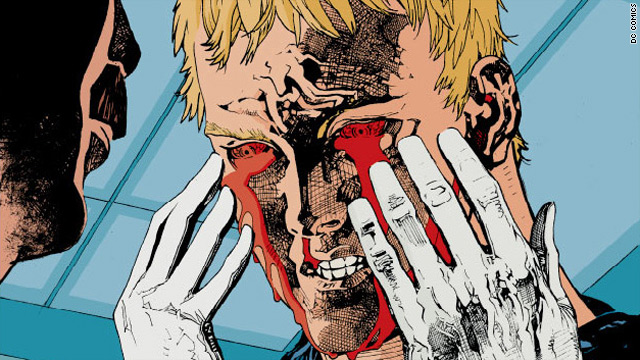 I was highly anticipating the binge, reading stories about nuclear men, dark knights and space police. However, at about two hours and forty minutes in, it became less like fun and more like a competition. It was the pile versus me. I was Augustus Gloop in Willy Wonka’s Chocolate Factory, perilously close to falling into the chocolate river and getting stuck in a drainage pipe. But for you dear reader, I kept on. I drank that chocolate by the handful until there was nothing left.

Let me step back and explain.

In September, DC Comics (owned by Time Warner, which also owns CNN) reset their entire comic book line back to the beginning.

Every issue is meant to be a starting point for a new reader. There are multiple genres in the lineup, including a western, a modern war comic and a number of horror books. The most innovative plan of the re-launch is that these comics are available digitally the same day they are distributed in print. Now you can fit all those books into a tablet or a smart phone and you can read them the same day as everyone else.

Although I was pleasantly surprised by how good some of these 52 comics were, I’m not here to review them. My preferences are subjective and likely won’t exactly match your tastes. That’s what DC assumes too. You are probably one of three types of audiences they’re aiming for:

• A curious “lapsed reader who drifted out of the hobby.”
• Someone who has never read a comic and is wondering if these new stories might appeal to you. Maybe you’ve enjoyed other media featuring DC’s characters.
• A current comics reader and fan. You get your comics every Wednesday and love them dearly.

My overdose on the DC Universe resulted in the following conclusion: While DC may have these three audiences in their crosshairs, reading all 52 comics at once gave me the sense that whoever’s behind the scope is more scattershot than they are a sharpshooter.

Reading these comics I recognized the names of many creators I grew up reading comics from.

Guys like Jim Lee, Rob Liefeld, Fabian Nicieza, Scott Lobdell, Greg Capullo, George Pérez, Brett Booth and more. I was reading comics by these creators in the 1990s, mostly when I was in high school. The comics market had a huge speculator boom back then, with a much larger population of readers than it has now. People clamored over the polybagged comics that these guys worked on in the 90s. All are still competent creators (Jim Lee’s actually the co-publisher of DC Comics now), but I think the main reason DC put these familiar names on their covers was to draw some lost readers back into the fold. To re-energize their base to put it in political terms.

Whether that happens remains to be seen, but let’s not forget that the boom in the 90s eventually burst, leaving some companies in bankruptcy and reducing the overall comics reading audience to less than 500,000 people. Getting back those lapsed readers wouldn’t just be great for DC, it could benefit the comics industry as a whole.

But given some of the choices the company made while approaching its other two target audiences, I’m not sure how solid their lapsed reader marketing plan goes beyond just ringing their bells with familiar creative teams.

It seems like the masterminds behind the re-launch had this transmedia presence in mind, changing things slightly to meet the expectations of new readers who may have come in fresh after enjoying something like the “Green Lantern” movie.

For instance, a character named Amanda Waller appeared in that film and was played by Angela Bassett. In the comics, Waller used to be depicted as a short, stocky and tough woman nicknamed “The Wall.” Now in the re-launched “Suicide Squad” she looks like … well, Angela Bassett. Similarly, Commissioner Gordon looks more like Gary Oldman than he ever did and the Gotham police department hunts Batman, just like they did at the end of Christopher Nolan’s film “The Dark Knight.” Given that movie’s success and the recent release of a “Green Lantern” film this summer, it’s no surprise that Batman and Green Lantern are the focus of the first issue of “Justice League,” the flagship title of the New 52.

DC obviously hopes that people who are new to comics will find a gateway here through characters they recognize, possibly adding their numbers to the weekly reading audience. To encourage this, it makes sense that DC would want consistency between media. Batman, Green Lantern etc. should be recognizable in the comics if you’ve seen the movies, cartoons and video games. This raises the chances of attracting new readers, especially children who aren’t familiar with the decades worth of history these characters have packed in their baggage.

But if branding uniformity is important to DC, they drop the ball several times across the New 52 line.

“Green Lantern” for instance doesn’t have Hal Jordan as its star. Instead, his nemesis Sinestro has taken his place as the culminating result of years worth of comic book continuity. Similarly, if you were a viewer of Cartoon Network’s “Teen Titans” series, you’ll barely recognize the re-launched “Teen Titans” comic. It bears more similarity to the current cartoon “Young Justice,” but for some reason doesn’t share its name. I hope you’re not a fan of the cartoon version of the Titan named Starfire either, because she doesn’t appear in the “Teen Titans” comic at all. When she does pop up, it’s in “Red Hood and The Outlaws,” as a hyper-sexualized alien nymphomaniac who prances around in a bikini, a far cry from the wide-eyed ingénue from the cartoon.

So while it may seem like transmedia consistency was part of DC’s master plan, there’s several schizophrenic moments like this where they miss the opportunity to appeal to a non-comics consumer. These moments seem to be trying to appeal to people who already read comics, but even that audience is treated oddly in this re-launch.

If You Love Us, You’ll Change

At the same time that DC is trying to cater to non-comics people and lapsed readers, they also want to retain their current audience of fans.

So the entire slate hasn’t been wiped clean.

Interestingly, this is most evident with the two most likely gateway characters, Batman and Green Lantern. A Batman storyline called “Batman Inc.” still has its tethers in the New 52, where Bruce Wayne has established Batman-esque franchises around the world.

“Batwing,” the Batman of Africa is one new title directly tied to that. Likewise, the Batman of Russia meets his demise in the first issue of “Batman and Robin.” Speaking of Robin, it seems that at least four separate characters have still held that name in the New 52, all of them appearing in separate re-launched comics. Similarly, “Batgirl” still has loose ties to an incident in the 1980s where the title character was shot in the spine and became a disabled information broker named Oracle. Now she’s somehow healed and back in the bat suit jumping around the city.

Likewise, the Green Lantern mythos seems relatively untouched. As mentioned above, Sinestro is the lead character of the eponymous title. There are still four different human Green Lanterns to keep track of and hundreds of aliens. Not to mention that there’s also a Lantern Corps for every color on the ROYGBIV color spectrum. “Red Lanterns” have their own title, while the whole rainbow gets clumped together in a book called “Green Lantern: New Guardians.”

Between all of this convoluted mythos and the massive family of Batman characters, it seems like DC is trying to keep their current audience happy, while also trying to attract new or lapsed readers with the tactics described above. They want to have their cake and eat it too.

There are several moments in the New 52 where it seems like the writers are using the stories to make a kind of meta-commentary on the fan backlash the comics industry inevitably hears when it makes a big change like this re-launch.

For instance, in “Justice League International” a group of protestors outside of the Hall of Justice are clearly meant to be a metaphor for disgruntled fans. The Head of United Nations’ Intelligence refers to them as, "Nothing but a bunch of basement dwellers who spend all day whining on the ‘net."

Later, these protestors blow up the Hall in retaliation. “Take our money, pad their wallets and use us to fight their wars,” says one guy while he sets the explosive charge, “Last thing we need is them buyin’ off our heroes.”

Odd rhetorical statements like this also occur in books like “Frankenstein: Agent of S.H.A.D.E.” and “All-Star Western.”

Both books have moments where characters reflect on how times are changing. Their separate conclusions are that you can never go back to the way things were unless you want to get left behind. This sentiment seems not just directed within the fictional universe, but beyond the fourth wall at the reader as well. If you don’t join us in this change you’ll get left behind. If DC wants to retain their current comics reading audience, then why does it feel like some of their characters are chastising those fans with the tendency to be suspicious of change?

It’s true the times, they are a changin’.

In my next piece on reading the New 52, I’ll reveal how deeply tied to our zeitgeist these comic books really are. Subjects like class, diversity, mass media and terrorism permeate the re-launch and show just how much of a cultural event this really is. The presence of these topical themes suggests again that the company really wants readers to identify with their new universe, whether they’re new, old or returning. After reading all 52 issues I can’t say for certain that their strategies will work.