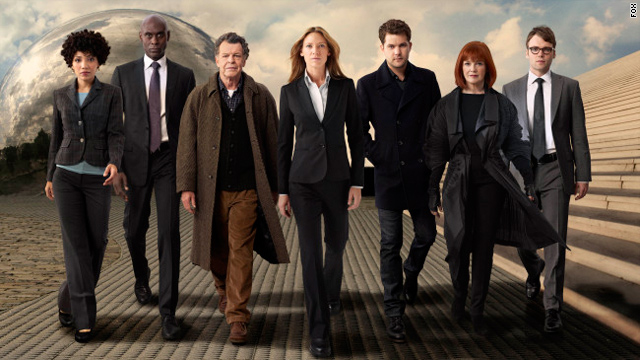 The fans of Fox's cult sci-fi series "Fringe" are a big reason why the show has survived to premiere a fourth season this Friday night, and the executive producers, Jeff Pinkner and J.H. Wyman, are keenly aware of it.

"We were very confident that [Fox executives were] pleased, creatively, with where the show was going. They know that we have incredibly rabid fans," Wyman told reporters during a conference call on Wednesday.

The fans really outdid themselves on Sunday by posting a YouTube video that blew away the producers.

So, what makes "Fringe" fans within geek culture so committed to keeping the series going? "I think they’re just fans of adventurous storytelling, and I think that they’re fans as much as the geeks are people that are willing to jump onboard a story and really follow it," Pinkner explained. "They’re sort of treated as this outsider element of fandom when the truth is they’re wildly passionate about the stories they like. What sort of separates them is their willingness to sort of really, really invest and make stories an important part of their lives."

Wyman chimed in to say, "Our fans, the ones who are kind of willing to embrace this form of storytelling and science fiction are people that are willing to go out on a limb with us and check out some really far out ideas. I think that’s the difference. I think they’re willing to just invest 150% because they’re in with the entire genre."

For the aforementioned Peter Bishop, played by Joshua Jackson, the producers say that his whereabouts will indeed be a mystery in the early part of the season.

"Peter is part of the DNA [of the show] and he’ll always be that," said Wyman. "Just because he doesn’t exist doesn’t mean that the three years that we’ve all invested in and watched does not exist. It really did happen, and it’ll unfold itself for you to understand."

In the meantime, Jackson has kept busy writing a new series of "Fringe" digital comics, on the suggestion of comic book fans Pinkner and Wyman.

"Josh’s story is a version of what happened at the end of last season when Peter planted the machine in the past in order to sort of like—the time loop that we discussed in last year’s season finale was continued on," said Pinkner. "[It deals with] Peter taking Walter’s machine from the future and planting it in the deep past, and Josh, who himself is a comic book aficionado/geek, sort of delves into that. That’s a version of the story that we would love to tell if only we had time on the show."

As usual, viewers can expect plenty of answers this season (and more scenes of the Observers revealing some of those answers), something that the producers say sets them apart. "There are a lot of shows that use secrets and string people along to keep people coming back every week and I don’t even know if those programs even have an answer. I don’t know how they build their shows," said Wyman.

"We want to give answers. We would both be frustrated if we were watching a show that we’re investing in and they weren’t giving us answers. We believe that the drama is enough in the program to keep people invested. So, the Observers are a large [part of that] and we feel it’s our duty to give some answers and back up everything that you’ve seen in the past with some concrete facts."