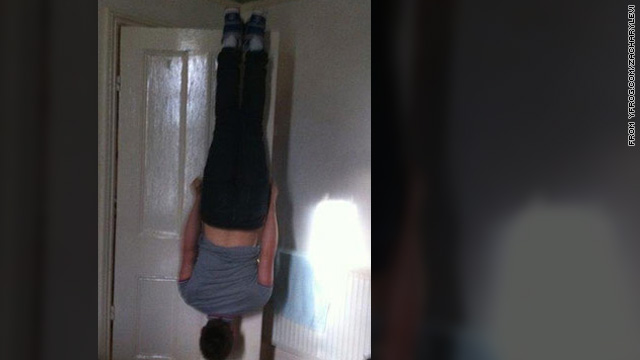 Levi tweeted a photo he found of a man hanging upside down by his feet in a doorway, not unlike a scene in the 1989 "Batman" where Michael Keaton's Bruce Wayne is caught doing the same thing.

Levi's tweets have been more and more influential ever since he launched "The Nerd Machine" website just over a year ago. His supporters helped drive "Chuck" to a fifth season.

Will "Batmanning" succeed as a nerdy twist on "planking?" ("Carbonite" planking by two of the writers of the next "Star Trek" movie, notwithstanding.)

So far, a Youtube video uploaded a few days after Levi's tweet showing various creative methods of "Batmanning" around the campus of Purdue University has 750,000 page views.

From the looks of things, a few more Batfans (or maybe "Chuck" fans) have given it a try.

It's certainly a unique way to show off "Batman" fandom. Who knows, maybe we'll even see a few examples of it in the lines for "Dark Knight Rises" midnight screenings next year? In any case, be sure to follow Levi's advice, and be careful out there, kids.