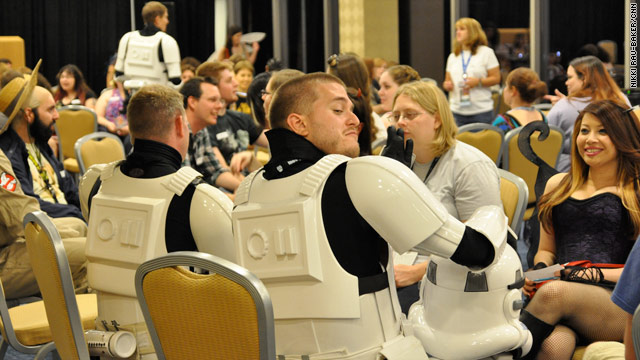 Lightspeed dating: Using The Force to find love at Dragon*Con

Editor's note: Computer support provider John Simpson, 39, from Kenosha, Wisconsin, attended his second Dragon*Con this Labor Day weekend. This year, newly single, he decided to attend the Lightspeed dating event to meet like-minded women. Kenosha doesn’t have a sci-fi/fantasy convention like Dragon*Con so the opportunity was something he could not pass up. Here is his account of the romantic, nerdy meetup.

Dragon*Con lets you revel in nerd glory. The event is a time to share in your tribes’ celebration, and, most importantly, experience a high likelihood of meeting guys and gals who understand your passions. Lightspeed Dating is an event at Dragon*Con that goes one step further in helping you find that likable geek of your dreams.

After getting one of the last cards to get into this rare event, I was seated in a circle of chairs surrounding another circle of lovely ladies from the con. Fairies, pirates and super heroines abounded. The rules were simple: One minute per girl, one conversation at a time.

While the organizers prepared for the event, I immediately sized up my competition. There were Stormtroopers, Time Lords, and participants that fell into many categories throughout the geek spectrum.

I couldn’t help but push the rules a bit and began talking before the official start of the event … to three girls at the same time. I had to work quickly, as the ladies were already eyeing the circle for other potential matches. I felt the women were doing the same thing I was - they were looking for a possible match that spoke to their passions by what genre of fandom they were representing. I didn’t have a costume so I had to depend on my gift of gab as the event started.

I opened with, “what sort of geek girl are you?” After all, if she was pirate and I was ninja, it would never work.

I heard similar questions around me from the ladies to the men. Most common were “What are you into? Who’s your favorite hero?” along with excited confirmations of matching interests.

Immediately I recognized something very interesting was occurring. Questions to potential matches from both sexes were not the typical questions you would expect to hear outside of geekdom. There were no blatant questions on politics or employment. It seemed more of an exchange to see how large your imagination was and if you could play well with others.

Every minute, the organizers announced the men were to shift to their right and engage in conversation with the next woman seated in front of them. I found myself speaking with potential dates of various ages and interests. I wasn’t noticing their age based off physical looks, but more along what decade their favorite books or television show was from.

I was more Dr.Who (Tom Baker) and Anne Rice vampires, so I found that was more telling of what I wanted in a match. The time flew by and before I knew it, I had talked to twenty-five women in twenty-five minutes that I probably would not have spoken to anywhere else.

A break was announced for water and a chance to collect yourself for the next round of exchanges. Most people continued to speak with one another, not wanting to waste valuable time - a charged energy could be felt through the room. Earlier, a successful Lightspeed match couple from last year's Dragon*Con had been introduced to the room.

The happy couple spoke of how Lightspeed Dating had given them the chance to find one another, giving hope to everyone looking for their own special geek in this very room.

During the interlude, I observed a competitor taking a glass of water to a woman I was very interested in. I thought to myself “What a good move and WHY didn’t I think of that?” I had to be quick and returned with a secret weapon.

From my pocket I removed a poker chip that had my name and phone number written on it. I told the woman in question I only had four and I was giving her my first one for a chance to gamble at love. Her face lit up and it seemed I had gained her attention once again.

Throughout the event, one truth was becoming very evident to me: This room full of colorfully clad people wanted to make a connection with one another that transcended the everyday routine of life and extended into the realm of make believe and fantasy. Everyone here was looking for a friend, a partner, and a fellow traveler through the multi-verses of geekdom.

I have my hopes I will find my Princess Leia to my Han Solo and perhaps The Force is with me on this one.