So you wanna be a zombie

Suzanne Johnson, an IT consultant from Atlanta, decided she wanted to be a zombie.  Not an actual zombie, of course.  She showed no signs of wanting to consume the living, or that she considered brains a delicacy.  No, the fan of AMC's "Walking Dead," simply wanted to dress up as a zombie, and she wanted her costume to look good.

The idea sprouted while talking with coworkers and fellow fans of the show about what to wear while going to Dragon*Con.  One of her coworkers then suggested going to the Zombie Prom, an undead themed party held Friday night of the convention.

So Johnson showed up to the "Pimp My Zombie" panel at the convention where makeup artists provided tips and tricks of the trade to help the average citizen transform into one of the undead.

At the end of the panel, several artists offered to help attendees prefect their look.   Johnson was paired with Abby O'Leary of Plastown, New Hampshire.  O'Leary picked up the craft from friend and professional makeup artist Rob Fitz.  Fitz had done her makeup for the zombie prom last year, and seeing that she had been bit by the zombie bug, offered to teach her how it was done.

O'Leary, who works in a call center by day says, "I love dripping blood down people!" 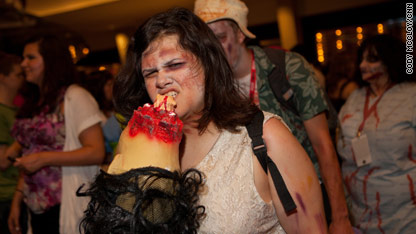 After they donned their synthetic rotted flesh and tattered duds, zombies of all stripes took a shambling stroll through the darkened streets of downtown Atlanta. Starting at the Westin hotel where the panel was hosted, the walk winded through four of the hotels comprising the convention, ending up where the annual Zombie Prom was being held.

The walk - or shamble, or stagger perhaps - went off without a hitch, even though the group was separated on the streets of Atlanta due to crosswalks at times ("Zombies obey traffic laws," as organizer of the event, Shannon Chesnut, pointed out), and made their way through the extremely crowded hotels.

Zombiefied versions of everything from "Harry Potter" characters to "Super Mario Bros.," "Where's Waldo," "Gilligan's Island" and "Scooby Doo" took part in the event. According to Chesnut, this was a much bigger turnout than they had expected. 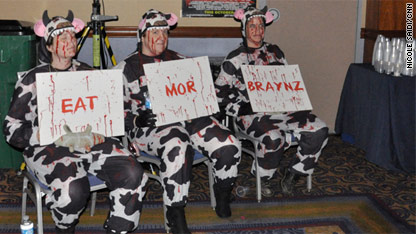 After the walk, the real fun began as zombies of all shapes and sizes took to the dance floor, generally reveling in being in a state of undead.

Of course, no prom would be complete without prom photos. There was a long line waiting to get photos taken, while at the same time a conga line was formed nearby.

Erik Peterson, a clinical pharmacist from Austin, Texas, was one of those who got a picture taken, and shared his theory as to the extraordinary popularity of zombies:

"It represents sort of a disconnect from society. A lot of people with dead-end jobs kinda feel like they don't have much unique about themselves, and the whole idea of zombies is an extension of that. It allows you to be just a little bit freer."

Another of the "undead," Martin Fox, traveled all the way from Bristol, England for his first Dragon*Con, and was enjoying himself at the prom. He was inspired by the AMC TV series "The Walking Dead."

"Zombies don't care," he said when asked to explain their popularity. "They're hungry, they eat people, and they're off."