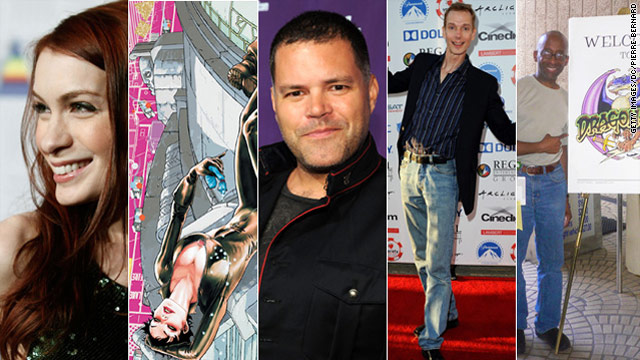 What's so special about Dragon*Con?

Dragon*Con isn't only popular with fans of sci-fi and fantasy. Many celebrities make sure to put the Atlanta, Georgia fan convention on their calendar year after year. We asked a few veterans of the annual mega-geek-fest – taking place over this holiday weekend – what makes this particular convention so unique.

Pierre Bernard, graphic artist for "Conan," said he likes the intimacy of the Con: "What blew my mind is that the convention takes place literally at the hotels where everyone is staying. At the hotel, everyone is mingling and hanging out. It's like a dorm party at a university. If you like meeting new people, you're guaranteed to make new friends at this convention. I feel like I'm going to an extended family reunion every year."

Felicia Day, star of "The Guild," "Dr. Horrible's Sing-Along Blog" and the upcoming "Dragon Age" web series, had this to say: "Dragon*Con is really unique in that it's run by fans, and has less of a corporate air to it than the average convention. And because it's run by fans, it tends to cater to even more niche interests, which I feel is kind of awesome. It definitely aims to appeal to every specific geek out there. It also has bar-none the best costumes I've ever seen, even above Comic-Con, so I always go just to take pictures of people."

Doug Jones, best known for playing bizarre creatures in "Pan's Labyrinth" and "Hellboy" (and currently appearing on "The Guild"), said, "Dragon*Con, next to San Diego [Comic-Con], is my absolute favorite. Love the costumes. I also love the layout of it, all the hotels strung together, so it's like a 24 hour party. It never stops."

Judd Winick, writer of the new "Catwoman" and "Batwing" series for DC comics, said: "Dragon*Con's fun, Dragon*Con's wild. You've never seen a better display of people in costume in one's life. A bunch of us were out there one night - Geoff Johns and Greg Rucka - and we saw people just hanging out in costume. They were some of the most amazing costumes we've ever seen, just from regular folks. It was terrific."

"Battlestar: Galactica" fan favorite Aaron Douglas is a regular at the convention: "Dragon*Con is one of the last sci-fi/comic book conventions still run by fans, for fans. It is a wonderful expression of all things geek. It occupies the last weekend of the summer, one last chance to blow out your geek before those costumes are simply not enough for the fall and winter. I come back to Dragon*Con every year for the fans, my friends and for a chance to partake in the biggest party outside of Las Vegas. Geek is chic and Dragon*Con is the mother of all things geek."