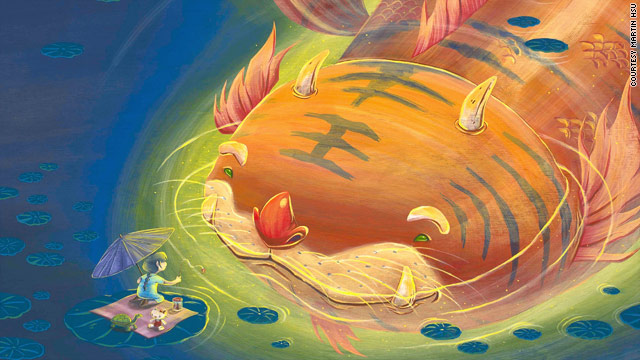 The illustrations he creates – on t-shirts, as art prints and even gallery paintings – make it easy to tell: Martin Hsu is an Otaku. He’s a nerd who is drawn to Japanese culture and obsessed with Japanese animator Hayao Miyazaki, and he’s inviting like-minded people to smile with him at the images that celebrate a love for things Japanese.

Hsu is surprised when acquaintances or colleagues don’t know who he’s talking about when he evangelizes Miyazaki. It’s something almost every fan of Japanese animation has had to explain to those not in the know: Miyazaki is like the Walt Disney of Japan.

“That’s always the fastest way to get the point across,” Martin Hsu, an animator, designer and gallery artist out of Los Angeles, California, said. “But the funny thing is, whenever I tell them that in the back of my mind I’m like, “No! No, no, no, he’s not!”

Fittingly, like many Japanese and anime fans, Hsu calls his hero “Miyazaki Sensei.”

“Sensei means “teacher” or “instructor” in Japanese, and that’s what people call him in Japan because he is such this massive figure. Not just an instructor of art but an instructor for life. My love for Miyazaki goes so much beyond just his art. I have so much respect for him as a person,” Hsu said.

Art and iconography are the language Hsu shares with Miyazaki and fellow Otakus. The story Hsu has to tell through his art is complicated: There is horde of information to be gleaned in his designs, from overt anime and manga influences to the racial baggage that comes from being an Asian American who reveres a culture his grandparents fought.

Hsu was born in Taiwan, and said that because his family lived through the Second Sino-Japanese War it used to be very difficult for him to tell his cousins or grandparents that he was really interested in Japanese culture.

“When I go to Taiwan or I go to China, even when I go to Tokyo, sometimes people mistake me for being Japanese. And I have to act like I’m slightly offended. ‘How dare you call me Japanese?’ But inside of me there’s a glimmer of joy and satisfaction. ‘Oh! They think I’m Japanese!’ So that makes me think, why is that?” he said.

“Japanese culture is perceived as this rooty, cool culture. There’s such a long history of artistry and refinement, and that doesn’t just apply to manga or art. It’s architecture, it’s design, it’s food, it’s sake, it’s all these other things,” Hsu said. “It’s this foreignness that’s inspiring; it’s the strangeness that hits you. I want to find out more about it. I can’t speak for all the Asian American community, obviously, but I at least feel a little guilty, to admit to my family that I’m a Japanophile. I just love everything about Japan.”

And it turns out to be something that manages to bring people who are not Japanese together, Hsu said. “I don’t want to call Otakus outcasts, because I don’t think we are. These days just because someone reads manga at the book store or watches anime doesn’t mean they’re an outcast.”

“I do think being this kind of nerd or geek, Otaku offers them a space to connect,” Hsu said. “Maybe they are a little awkward when it comes to socializing with people on just a regular level. Maybe they need an injection of bizarre weirdness that manga offers or anime offers to connect to somebody. It’s an instant topic that you can relate to somebody about.”

Hsu’s most overt handshake to the Otaku community is a simple t-shirt that conveys his deepest desires. It has a drawing of Miyazaki’s face with the words “Miyazaki Club” written directly underneath.

Hsu’s family immigrated to the US in 1991, when he first saw some of the Miyazaki movies. He had been voraciously reading and collecting manga since he was 10 years old and living in Taiwan, and at first was only casually interested in Miyazaki’s Studio Ghibli films.

Fast forward to Hsu’s college years, when he really started getting into the artistic ability of Miyazaki through animation classes. His fascination with the sensei took hold and Hsu said he’s been a fan ever since.

In particular, Miyazaki’s risk-taking inspires Hsu. As an animator who has worked for Nickelodeon and Disney, Hsu laments that American animation studios gravitate toward commercial ventures with lots of flashy explosions.

By contrast, Hsu describes Miyazaki’s films as, “these provocative movies dealing with current events and politics, involving nature’s relationship to humans. He gives us really strong characters. But I also love his quiet movies, the sort of everyday life movies which you never see in Western animation. We’re so used to seeing explosives and grand, huge action in these movies with really big stories that when you see a quiet movie that Miyazaki does, it is not mundane at all. It is, like, the most interesting movie,” he said.

“It’s a reflection of reality but it’s a really hard story to tell. But I think when it’s told right, with strong characters, it’s so compelling. It takes you back to a period of time you can relate to,” Hsu said. “They definitely bring me back to Asia, back to grandma’s house in the countryside, outside, running around with my cousins. I miss those days, it’s very nostalgic.”

So how does Hsu mix provocative current events, politics, nature and nostalgic stillness? In a cute and unsettlingly grotesque mixture of animals that immediately make an Otaku’s eyes widen and have them telling Hsu that they get it. Hsu calls his creations “The Crakens.”

“The Crakens are made of half land, half sea animals and they have the ability to adapt to any environment. They can survive on land and in water. The reason for that is that they’re actually the result of pollution by the humans. And of course, in my fantasy, Miyazaki would do a move about this, going back to his sensibility on the environment. It’s being influenced by the environment and current events and seeing where it takes you. For me, it was Crakens,” Hsu said.

Some of his Crakens include mixtures of a pufferfish and a cat (Puffer Puss), a bunny and an octopus (Octobunny), and a panda bear and a crab (Crabby Bear.)

“They live in a dead zone, this area of the water where no oxygen exists, but they do. Even though they might look a little vicious, they’re actually nice folks and they’re kind of cute. But they’re able to live in any environment, and that’s probably what it’s going to come to for us at some point. If I had to track where that expression comes from it would probably have to go back to some of the Miyazaki movies. They allowed me to do something like that, something that is so weird that it takes five minutes to explain to people what these creatures are and why they are half land, half sea animals. And trust me, there’s a story!”

But Hsu knows his fellow Otaku nerds see that there’s a story in his art. He hides many stories in his art, almost like a treasure map that only nerds can read.

“There’s a reason why nerds are cool, right? It’s because we think we’re better than everybody else. We’re into all these perceived-as-weird-by-the-public things but I find cuteness and kindness in these creatures. When I tell people stories about the Crackons, they do get it about the environment and how it has to do with things we’re doing today. Nerds are nice people. They might not act like it all the time but they know what’s going on around the world. And they can relate to this sort of tenderness in creatures,” Hsu said.

“We’re sort of ambassadors for tenderness in a way. It’s kind of like, “Yeah, you can pick on me all you want, and I might react to it, I might not react to it, but I still want to show you why I’m this way. I want to show you why I read manga, why I collect anime. I want to bring you into my world because it’s so fantastical. It’s so much more than reality.” That’s how I think when I do my art, I want to bring people into this fantasy world, it’s what I believe in. I just want to show it to people.”

Hsu’s favorite story to tell is that of “Lily’s Kitty.” It’s a large painting he did in 2009 that shows a gigantic koi fish in a pond full of lily pads. On one of the lily pads is a little girl.

“She’s holding an umbrella because it’s about to rain. And she’s got a little cat tease, one of those feather things tied to a stick. The little girl’s name is Lily. Now why is it called “Lily’s Kitty”? Because this koi fish - which I call the Tiger Koi, because it’s got tiger stripes - is coming out of the water and it’s greeting her. And it’s glowing, it’s absolutely glowing,” Hsu said.

Here’s where the Miyazaki comes in. “I like it because part of it is actually inspired by “Ponyo,” one of the newest movies by Miyazaki,” Hsu said.

“You know how her mom glides through the water and she’s glowing? That was one of my biggest inspirations because I love that. Not just the fact that she’s radiant, this creature, but the warmness, it’s like she’s so warm because she’s a mom. She glows and she’s cozy,” he said.

“So Tiger Koi, is coming out of the water to greet Lily because that is her secret pet and nobody knows about it. In this giant, massive pond it’s surfacing, but only when Lily comes. Tiger Koi is this mysterious, prehistoric koi fish and comes from the deep, the very bottom of the lake, up to greet her. It’s this fantasy.”

Like Miyazaki movies, “Lily’s Kitty” takes the observer into another dimension, Hsu said. “It’s still a reflection of reality but everything is a little off, a little twisted in the most wonderful way.”

How do we sign up for the unofficial Miyazaki Club, again?