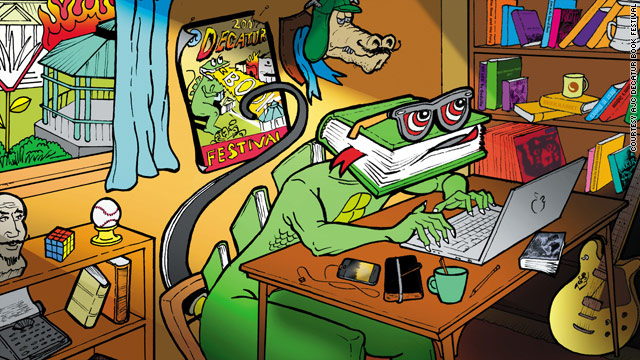 Dragon*Con's nerdy sibling to the east

Atlanta’s Dragon*Con might be the nerdly epicenter of the weekend, but for those of you in town, there’s a rumble of something geeky six miles to the east.

The Decatur Book Festival is an annual Labor Day weekend gathering of 50,000 book lovers and literary types just outside Atlanta. It can’t compete with the fan-and-costume overload of Dragon*Con, but it has a Faulkner-quoting monster named Bookzilla for a mascot, so that counts for something.

What counts for more: Among its lineup of best-sellers, romances and kidlit, there’s a block of fantasy, sci-fi and horror authors, including some Dragon*Con guests like “Hellhole” co-author Kevin J. Anderson and steampunk-anthologizing authors Ann and Jeff VanderMeer.

For the first time, there’s a science track – created in partnership with the Atlanta Science Tavern -  which includes Sidney Perkowitz, author of “Slow Light: Invisibility, Teleportation and Other Mysteries of Light,” and  David Eagleman, who wrote “Incognito: The Secret Lives of the Brain.”

There’s an undercurrent for comics-lovers, too, including Gregg Hurwitz – known to some for writing Wolverine and Punisher – talking about thrillers; Max Allan Collins, the man behind “Road to Perdition,” riffing on whodunits; Ray Fawkes, talking about his 18-lives-in-one-book graphic novel, “One Soul.”

Here's the entire book festival schedule, if you need to break away from the superheros and sportsfans crowding downtown Atlanta this weekend. Most festival events are free.

The geek/reader overlap is very much on purpose, says Terra Elan McVoy, the book festival’s program director, herself the author of “Pure” and “After the Kiss.”

“They are really, really hungry readers and really terrific fans,” she said. “It’s a boisterous and enthusiastic bunch.”

Translation: At what book festival can you expect readers to show up dressed like Stormtroopers and Hogwarts students?

Only one sharing a city and weekend with Dragon*Con.