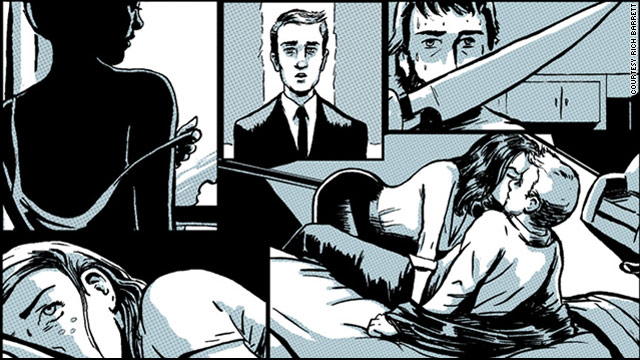 What was the comic book those two were making bank on? "Teenage Mutant Ninja Turtles." It didn’t take long for the two to become millionaires.

But Kevin Eastman and Peter Laird’s success story is an almost unbelievable fairy tale. Self-publishing a printed comic book is not so easy in this day and age.

Comic creators who self-publish have their own community, either striving to reinvent the medium or hoping to make their mark and get the attention of publishers. These DIY comics form an entire stratum at the base level of the comics industry. Webcomics and digital distribution have changed the landscape, but publishing comic books is hard work, especially in print.

“DIY comics rarely turn a profit when you add in the cost of printing and table fees if you’re setting up at conventions,” says Eraklis Petmezas, self-publisher of comics like "Mr. Lune" and "Last Cigarette." By “table fees,” Petmezas refers to the cost of setting up a space at a comic book convention to sell his wares. Most creators today barely break even and it’s incredibly difficult to make a living from it.

Cartoonist Erika Moen, co-creator of "Bucko," said, “It really depends on a ton of factors and a little luck. For some people, yes, it's possible to make a living; for others of the same ability, no. It depends on how dedicated (i.e., willing to spend dollars) your audience is, how well you can distribute your books, how much money you need to survive on - there's so many factors!”

There are four major factors that make it more difficult to succeed with a self-published comic today.:

Creating the content
DIY Comics allow creators to tell their stories without having to obtain the approval of the gatekeepers at a publisher. There’s currently a plethora of independent comics out there with unique, interesting voices. These creators are their own publisher. Additionally they’re the writer or artist. Many times they’re all three.

Rich Barrett is such a creator. He’s the writer, artist and publisher of "Nathan Sorry," a comic about a man who fakes his death after 9/11. He’s also a commercial graphic designer, who is used to earning an hourly rate in his day job, much higher than what he receives for his demanding comic book efforts.

“Making comics requires so much of my time that my hourly rate works out to less than minimum wage,” he says, “And that's for work that people would actually pay me for. Making my own graphic novel and selling it online in installments brings in even less of a revenue stream.”

Let’s get down to brass tacks. How much does it cost to simply create a comic? Jim Campbell, a comic book letterer who has worked on comics like "Hack/Slash" and "Grimm Fairy Tales," recently presented a loose breakdown of what publishers pay beginning creators. His estimate is $250 per finished page, or a total of $6,000 for your average 22-page issue. If you’re not doing all the creative work yourself, you’re going to need to pay for at least some of these costs.

“Artists deserve to get paid for their hard work,”  Dave Wachter, co-creator of "The Guns of Shadow Valley" and "Scar Tissue," said. “If you want quality, you should be ready to pay for it.”

Putting it on paper
But that's only at the halfway point. There are still publication costs to consider. Luckily for comic entrepreneurs, there are publication options now that weren’t available to Eastman and Laird. Barrett says, “For costs that almost anyone can afford you can now get professional looking comics printed via print-on-demand (POD) resources.”

Printing could be cheaper if you go with a different kind of company that doesn’t use the digital printing of POD services, but the ins and outs of pre-press print production (workflow, proofing, formatting etc.) can be a tricky and costly learning curve for first-timers.

Some creators who sell small quantities make “minicomics” instead: photocopied issues bound with a saddle stitch stapler. Not all comic shops will carry minicomics though, making them even more esoteric. Some comic book readers don't care for the format and won’t purchase minicomics, even if they’re readily available.

Getting the word out
Once a comic is made, one might think the next step is distribution. Remember the Eastman and Laird story though - they didn’t get decent distribution until after they had marketed their comic to the press.

This is when creators get to do even more unpaid work! Two proven methods of promoting a DIY comic are a) working the floor at comic book conventions and b) spreading the word via social media.

Networking in the online DIY community lets you communicate with fans of your work, while also meeting peer creators who can support you down the line. The comics industry is currently so small that a lot of the dollars changing hands come from business-to-business transactions. An important audience for DIY comics is definitely other self-publishers. “Personally, 50 percent of my sales are from fellow creators,” said Petmezas.

As Petmezas indicated, conventions aren’t free. Getting table space to sell your product at a convention can cost anywhere from $100 to $500. That doesn’t include your additional travel and lodging expenses, which can get up to $2000 just to attend. But the strength of sales and marketing opportunities at conventions can make them worth the investment. Robert Wilson co-published his superhero buddy comic "Knuckleheads" with Brian Winkeler last year and sold copies at conventions.

“With no distribution and very little retail support we were able to sell about 500 copies, nearly paying for the print run,” comic artist and illustrator Wilson said, “The majority of those sales were from comic shop appearances and comic conventions.”

Placing comics on shelves
At the last stage of DIY comics publishing, it’s time to get those books distributed to readers. If you want to get physical comics into stores you’re going to have to deal with Diamond Comic Distributors. Since the mid 1990s, Diamond has pretty much owned the distribution market, to the point that they were subject to an anti-trust investigation in 1997.

Keep this in mind before signing any distribution contracts: Diamond’s current policy is tough on self-publishers. It requires that retailers order at least $2,500 worth of your comic books. This basically means that you have to sell that many books right out of the gate, or you’re stuck without distribution for your following efforts. According to Diamond’s Vice-President of Purchasing, Bill Schanes, this isn’t a “cut-and-dried” rule and Diamond will work with you if your sales trend positively or you take significant promotional steps.

“The established distribution channels for getting your book to comic retailers have actually shrunk,” said Wilson, “This has the potential to create a big supply and demand problem. Because it is so easy to reproduce a comic there are now more self published books than ever, with less means of distributing physical copies to the comics reading public.”

In the end
When you step back from the process of self-publishing, one thing becomes clear: businesses like print-on-demand, comics conventions and Diamond thrive on creators who are willing to put their budget in the red by gambling on success. Getting your comic through this process is difficult.

“We certainly hope the publishers who work with Diamond do so profitable,” says Schanes, “No one should be expected to lose money, but in some cases, that does take place through no fault of Diamond’s.”

Despite all this, Moen said that depending on the factors involved; it’s not impossible to make a living from your comics. “Being self-employed and self-publishing requires a ton of hours, commitment and sacrifice,” she says, “It's not easy, but you can make a profit and even make a living - but it will never be easy.”

“Comics are hard work,” says Petmezas, “I think most of us do it for the sheer satisfaction of getting our stories out there. I love making comics, but they'll break your heart if you let them.”